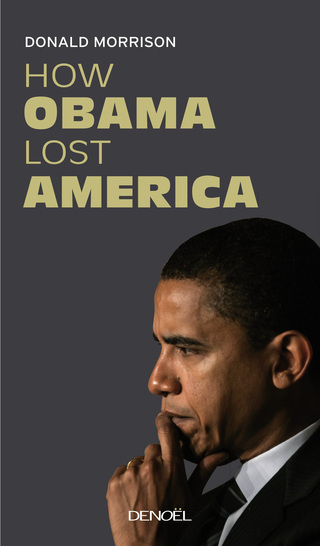 A connoisseur of the political workings and evolutions on both sides of the Atlantic, Donald Morrison writes that Obama would make a good president of France -- and Sarkozy of America. Full of anecdotes, of visions of an America divided, this book reminds us that a president (in the U.S. and elsewhere) needs more than dreams.

It was daring, but Donald Morrison did it. Predicting ten months in advance the outcome of the U.S presidential election without even knowing who the Republican nominee would be. Better yet, he did it by examining the character of America's first black president. Book of the week.

Donald Morrison is the right man to help the French understand his country, which sometimes appears so indecipherable to us. At the dawn of this election year, it is imperative to read his book "How Obama Lost America." Despite this slightly peremptory -- and perhaps premature -- title, the author has much sympathy for the President, whom he chides for tactical mistakes and a failure to communicate. But Morrison also paints a compelling portrait of another America, the one of "birthers" and Tea Partiers. He uses polling data to show how these two countries do not really understand each other -- as if the Civil War had never ended. He informs us, for instance, that a fifth of Americans know someone who has been kidnapped by aliens. For these folks, and many others, describing Obama as an intellectual, a complicated and introspective statesman, is a condemnation. The worst thing is that Obama often gives them reason to think that way.