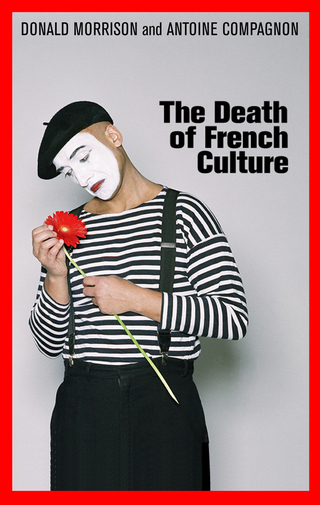 The Death of French Culture

"[The Death of French Culture] speaks of the fate of all dominant cultures, which at one time or another are condemned to watch their dominance decline."

–Berhard-Henri Lévy, French author and philosopher, The Guardian
"The book offers yet another delicious glimpse into a relationship that never ceases to fascinate, that between the U.S. and France. What is most compelling about it, though, is the accuracy of Morrison’s argument combined with his deep affection for France. There is no rejoicing in his writing. Morrison’s is a true lament and, toward its end, a scramble to unearth nuggets of hope. In his appraisal of France’s growing incapacity to maintain its universal cultural pull, Morrison entreats us to think about the meaning of culture and universalism in the 21st century."
–Catherine Fieschi, Prospect
"What bug bit Don Morrison to make him tear French culture to pieces?"
–Edouard Launet, Libération
"[Donald Morrison] has a completely false and muddled mind, as does most of his readership. He throws Proust, Monet, Piaf and Truffaut under the same heading and considers France is dead because we have no celebrities of the same caliber at the moment."
–Maurice Druon, Member of the French Academy, Le Figaro
"The French, who are great extrapolators, are pulled this week in two contradictory directions. The Nobel Prize awarded to J.M.G. Le Clézio reassures them that the inventiveness of France’s novelists is undimmed. Almost simultaneously, though, the weekly Nouvel Observateur ran a cover story on intellectual life in France, in which the pressing question seemed to be whether there was any such thing. The occasion was the publication of a book-length essay by the journalist Donald Morrison, called 'What is left of French culture?'

"Mr Morrison caused a stir last autumn when an article he wrote for Time ran under a headline announcing the 'death of French culture.' The actual article was more a love letter than an obituary. But Mr Morrison did note that French culture – which a few decades ago could be found in movie theatres all over Bombay and bookshop windows up and down California – today exports very poorly. Fewer than a dozen new French novels get translated in the US in a normal year, he claims. This ought to worry us not because French culture is weak but because it is strong... "
–Christopher Caldwell, The Financial Times
"As for those Americans who do still care about French culture, mostly in the intellectual elite, they deplore its dire state of crisis... The author, Don Morrison, argued that [French culture] is barely visible in the wider world. Few works of French fiction are translated into English today, when earlier generations of French writers (Sartre, Camus, and Malraux, to name a few) had a remarkable following abroad. ... Whether one takes music, art, or even fashion, the story is the same — the French capacity to impact the rest of the world has been seriously eroded."
–Sophier Meunier, Princeton University, French Politics

"It's not shocking that Le Figaro should devote three pages to responding to Don Morrison's silly, exaggerated article... Given that they're a nation of hypochondriacs it's scarcely surprising that the French spend much time fretting over their supposed decline. Some of that is obviously real, forcing a reappraisal of what it means to be French. But so what? The notion, which Americans seem weirdly insistent upon believing, that France can only hope to succeed if it becomes more American (and hence, in some respects, ceases to be France) is very strange. So what if their cultural protectionism seems odd to the anglo-saxon mind? Let the French be French for crying out loud!"
–Clive Davis, The Spectator
"This is one of the old, cyclical, favourites of foreign journalists, like the prevalence of dog-shit on the streets of Paris and the decline of French love-making. I wrote something similar on the collapse of French creativity when I first went to Paris 11 years ago. I was wrong, but not wholly wrong, then. [Morrison] is wrong, but not wholly wrong, now."
–John Lichfield, The Independent
"'The Death of French Culture'... hit French intellectuals right in the heart, reviving an old polemic. Sartre, Camus, and then nothing? We know the usual discourse on the decline of the French language, Gaullist statism and the box-office triumph of American blockbusters. Behind this rather sensational title, however, journalist Don Morrison raises more profound questions about the identity of French culture."
–Philosophie magazine